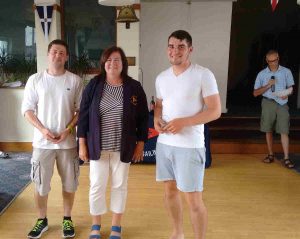 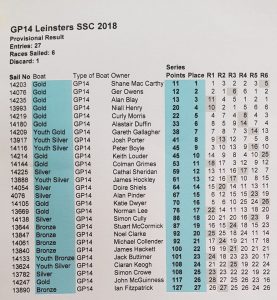 Johnston showed great form and speed but had to be happy with 3rd place.  The 2018 Champions were  World Champion Shane Mac Carthy and Damian Bracken, with Ger Owens and Melanie Morris taking 2nd. The result was up for grabs right to the end with Alan & David taking a 2nd and 2 bullets in the final 3 races and only 3 points dividing the top 3. Peter and Stephen Boyle finished in 9th.

With only a few weeks to the GP14 World Championships in Mounts Bay Sailing Club, Cornwall, the Irish fleet converged on Skerries Sailing Club for the 2018 Leinster Championships with our own Commodore Stephen and son Peter Boyle, along with Katie Dwyer/Michelle Rowley and Alan Blay and David Johnston on the start line.

With winds from 6 to 15 knots through the weekend, the race committee managed 6 races for the 27 entries. With 12-15 Irish crews heading to Cornwall at the end of July this was a key event in their preparation. With the Worlds so close and also with the World’s back in Skerries Sailing Club in 2020, the Skerries race committee included gate starts for all races.

The Class having organised coaching in the early season facilitated by Graeme Grant saw the results with some very quick boats over the weekend. A full event report and results will be available on the gp14ireland website shortly.