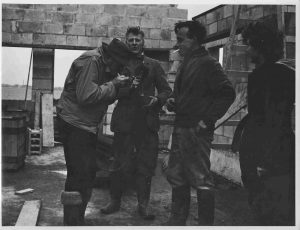 It was with great sadness that we heard today of the passing of past member David Hogg. David was a dinghy sailor of some renown in both International 12 & IDRA14 Classes.

He attended the 75th Gala Dinner back in 2014 and was remembered as our oldest living National Champion, having won the International 12 National Championship back in 1949 with his crew Joe Finnegan at Royal Muster Yacht Club, Crosshaven.

David raced as part of the Sutton Dinghy Clubs Book Trophy team from the late 40’s to mid 50’s, skippering the team in 1951. David is pictured during the building of the initial Club house in the early 50’s with John Weaving and Ann Dyer.

Our thoughts are with all his family at this time.