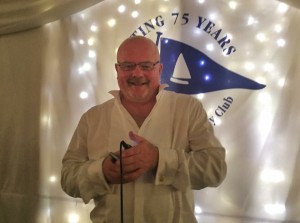 Ron, having completed his MC duties at our 75th Anniversary Gala Ball, now turns his attention to making sure there was music till very very late.

It was with great sadness I heard this morning that Ron Maher had passed away after a very short illness.

As husband of Wendy, father to Callum and Elysia and part of the Sargent clan, Ron was always likely to end up in Sutton Dinghy Club at some stage despite his other extensive interests in golf, rugby, hockey, photography, music and DJ’ing.

Locally Ron played a tremendous role in helping kick start Suttonians Hockey Club emergence as a Senior Club and his commitment to Suttonians Rugby Club as a player, coach, Leinster Branch Senior Referee, Club President, referees assessor, Chairman, fund-raiser, Director of Rugby and as a supporter of women’s rugby from the early days.

I have known Ron for a long time through Suttonians Rugby Club and latterly sailing and involvement in Sutton Dinghy Club. I vied for full-back and scrum-half positions with Ron for a no. of years in Suttonians before he wen to London Irish for a few years. We trained together plenty yet rarely played together. It seems I took one of the only photos that exists of Ron playing rugby back in 1983 and it happened to be for the Clubs 1st XV. He had never seen it before. I presented it to him only a couple of weeks ago out at his house. He was delighted. It was unfortunately the last time I got to chat to him.

Ron’s son Callum and David are close friends having sailed Mirrors together as well as playing rugby. Wendy, Jane, Ron and I spent many enjoyable sailing events together supporting the lads and enjoying the odd glass of wine (!) all around the country. Ron took Jake under his wing on a rugby tour of Italy for which we were very grateful. The girls, Meisha, Lien and Jane cajoled him to do DJ for plenty of house parties including my 50th. Ron was brilliant fun. Great times, great memories.

As Commodore between 2011 and 2014, I was the main benefactor of his involvement in the Dinghy Club. Ron came on Committee as Hon. Secretary and played a key role in helping bring stability to the Club on the back of a quite traumatic period for the Committee. Like most things that Ron put his mind to, he took it serious. I remember during a quite fractious and difficult period, Ron emphasising that the role of the Hon. Sec was to ensure the Club was protected and that was what he was going to do – There was a problem, he could help and was prepared to put his hand up, commit and be counted. Believe me, this was not a trophy role for Ron and he did not have to get involved. But he did.

I was indebted to him over those 3 years and the strides the Club has made since then go beyond the obvious. Aside from keeping us on the straight and narrow, he helped improve our approach to planning and our commitment to good financial discipline which has stood to the Club to this day.

On behalf of the Committee and members of Sutton Dinghy Club, I would like to extend our thoughts and condolences to Wendy, Callum, Elyssia and the extended Maher, Rudd and Sargent families. If there is anything we can do to help in the coming days and months, we are here.
Ron my friend – RIP. We will all miss you.

PS – Under current restrictions the funeral will be private and may be viewed on the St. Fintans parish webcam at the following link https://www.mcnmedia.tv/camera/st-fintans-parish-church-sutton-dublin on Friday, Nov. 6th, at 11am. Those that would like to their send condolences may do so on the link below. Family flowers only. Donations, if desired, to St. Francis Hospice, Raheny in Ron’s name.